Everything You’ll Need to Start Hunting With Traditional Archery Gear

Once you have selected your traditional bow it’s time to consider the traditional hunting accessories you will need if you plan to go hunting either large or small game. Archers may prefer different style bows for personal reasons and that could influence the accessories selected. For our discussion let’s make a basic assumption that the bow selected is the Night Ridge from October Mountain Products.

The Night Ridge is a traditional style recurve bow but one that offers an aluminum riser with removable limbs allowing the user to easily select the length of limb and draw weight desired. The riser is drilled and tapped for a bow sight and stabilizer as well as providing for a quiver mount. The Night Ridge allows the user to setup the bow simply and strictly as a traditional bow or upscale the accessories to make it a traditional bow with a more modern twist. It is entirely up to the user as to what they desire but following we will cover several options that are appropriate for consideration.

The purpose of a tab or shooting glove is to help protect the fingers but more important to ensure the archer gets a smooth release. Most traditional archers like three-fingered leather shooting gloves. Gloves come in various sizes so try them on to see what fits your finger size best. Although finger tabs are not as popular with traditional shooters they deserve some consideration. While providing finger protection a shooting tap also is a large smooth service and some archery feel they offer a smoother release which impacts accuracy. 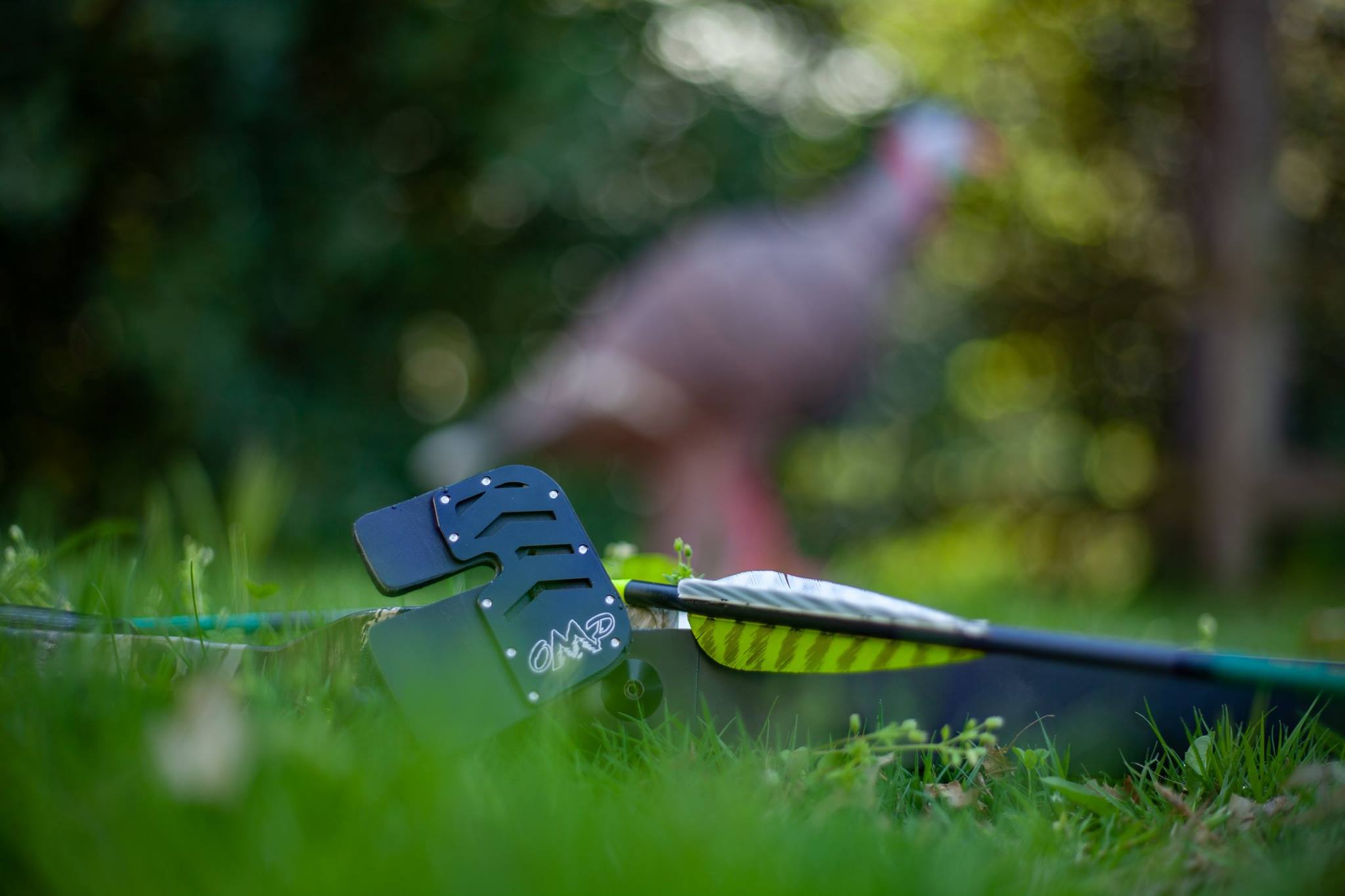 The other basic piece of gear needed is an arm guard. While the arm guard protects the bow arm from being stuck with the bowstring on the shot it actually serves a more important purpose. The arm guard provides a smooth surface for the bowstring to ride forward if it does make contact with the bow arm.  It also prevents the string from snagging or getting caught up in the jacket or shirt sleeve either of which can drastically impact the shot. Traditional arm guards are normally available in lace-on models which many traditional shooters prefer mainly for the appearance. However, a wide variety of arm guards are available with Velcro fasteners which are quick and easy to put on and do a fine job.

An archer interested in keeping everything traditional normally will install a traditional rug rest which is mounted directly to the shelf of the bow and the riser providing a smooth place for the arrow to ride. These style rests are either entirely comprised of felt or as a felt rest with a leather side plate that mounts on the riser. 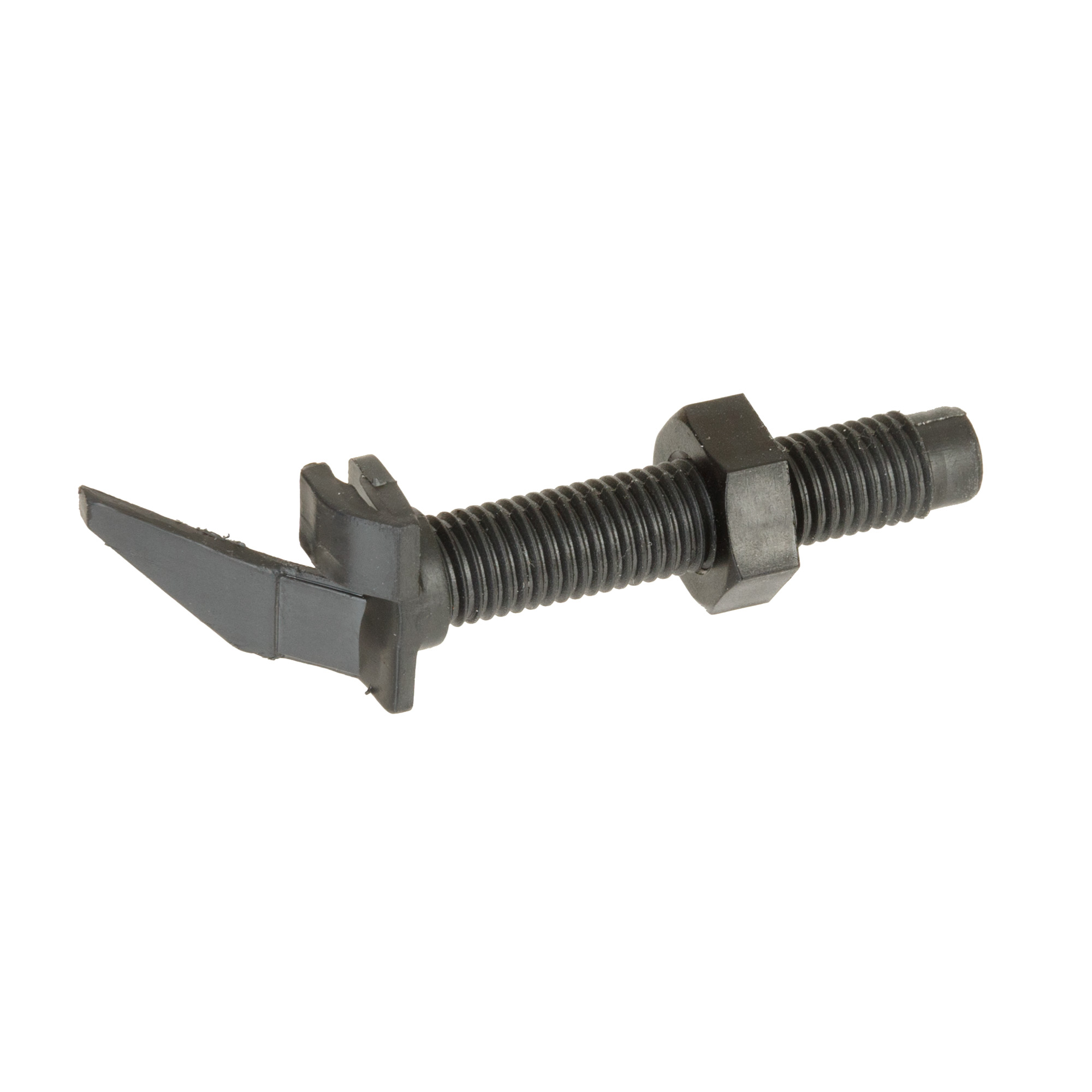 A second option for consideration is a traditional style adhesive-backed rubber arrow rest that can be fastened to the side of the sight window. These rests allow the arrow to be shot from above the shelf providing more arrow clearance, more consistency resulting in increased accuracy.

Because the riser of the Night Ridge is drilled and tapped an adjustable rest such as The Hunter Rest from October Mountain or a similar style rest can also be installed. An adjustable rest offers the ability for some limited tuning to optimize arrow flight not available with a simple traditional rug style rest.

Although normally associated with target archery a bow sling can also be added to a traditional bow if desired. When shooting any bow it is important to keep control of the bow without gripping it so tightly as to influence the shot through induced torque. The trick is to hold the bow loosely enough to allow it to react naturally on the shot without having it accidentally fly out of your hand. A bow sling attaches to the front of the bow and has a sling that goes over the shooter’s wrist. It allows the shooter to relax their grip on the bow without fear of dropping the bow on the shot. There are two styles of bow slings, one fastens to the bow with a small screw mounted in the stabilizer hole and the other is a stick-on style that can be used on any riser tapped or untapped. 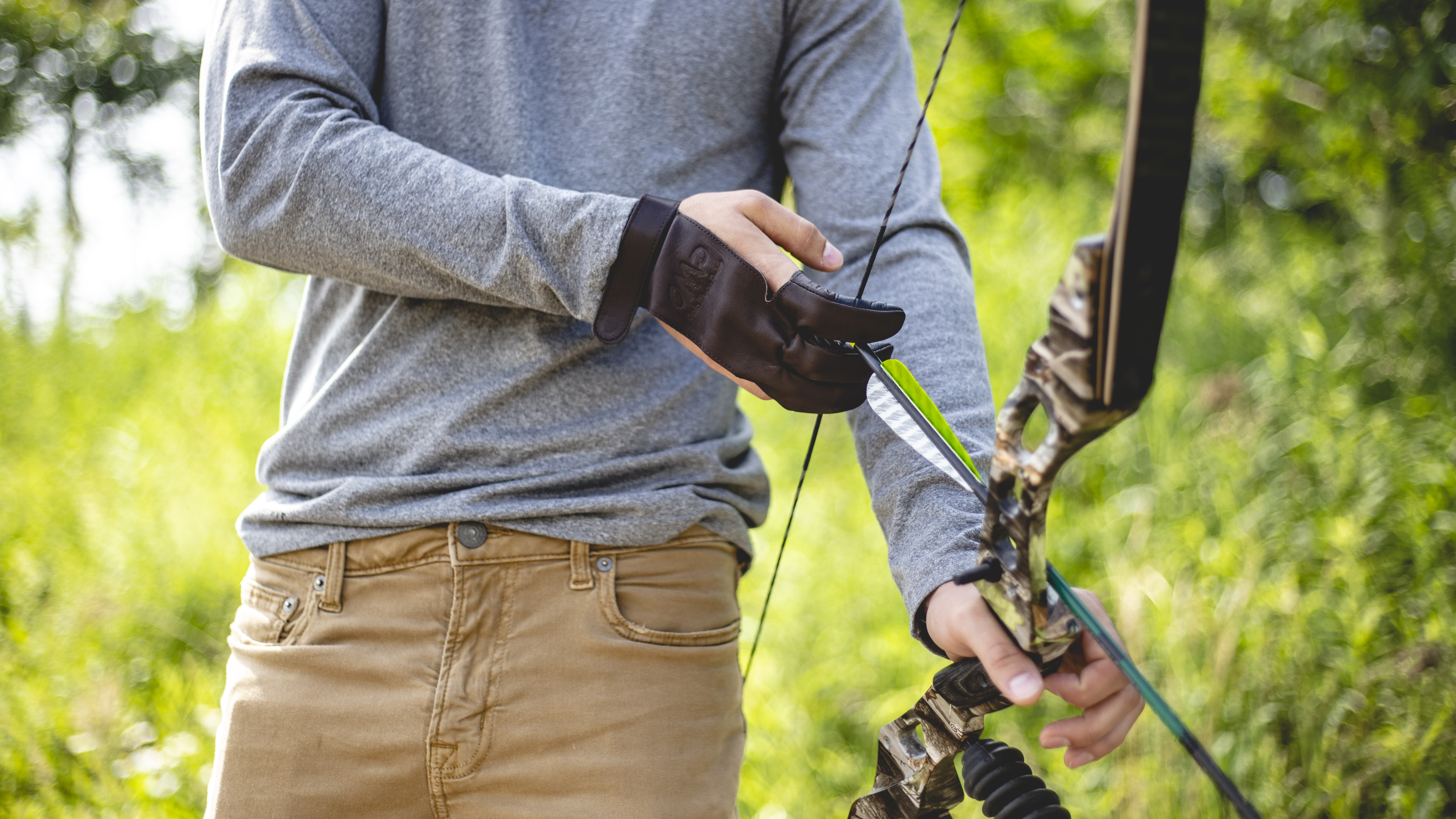 Many archers prefer a traditional bow to a compound because of the increased challenge and simplicity. Most traditional archers prefer to remain as basic as possible which means shooting what is termed as “bare bow” meaning no sight. These archers shoot instinctively, like throwing a baseball or use a gap method in which they judge the gap between the point of the arrow and the target. The gap is larger at close distances and smaller as the distance to the target increases.

However, there is also a group of archers that while they prefer the simplicity and tradition of a recurve like to use a sight for increased accuracy. If you are one of those archers and intend to hunt a simple movable pin sight will easily do the job. Because hunting with traditional bows is normally done at shorter ranges a simple compact three pin sight is more than adequate. The bow riser on the Night Ridge recurve is drilled and tapped for a sight and sight mounting brackets are standard so the installation of a sight is easy.

While a traditional back quiver or belt quiver is great for target shooting in the back yard or on the range when it comes to hunting some additional factors must be considered. When carrying sharp broadheads for hunting the broadheads should be protected and enclosed so as to not accidentally harm the shooter but the heads should also be protected against coming into contact with each other, with a brush or anything that could dull the cutting edge. There are a wide variety of hunting quivers on the market that fill that purpose and they fall into several categories. Bow quivers that mount on the bow itself, back quivers that normally fit vertically on the back between the shoulders and belt quivers. Models of all of these quivers can be found that hold each arrow separately with the broadheads covered with pouch protection of some sort, There are also bow quivers that slide over the bow limbs themselves. These are least desirable as they must fit perfectly so as to not interfere with the action of the bow limbs during the shot. If a bow quiver is desired one that mounts directly to the bow riser is the most efficient. The Night Ridge is drilled to accept both a bow sight and a bow quiver. 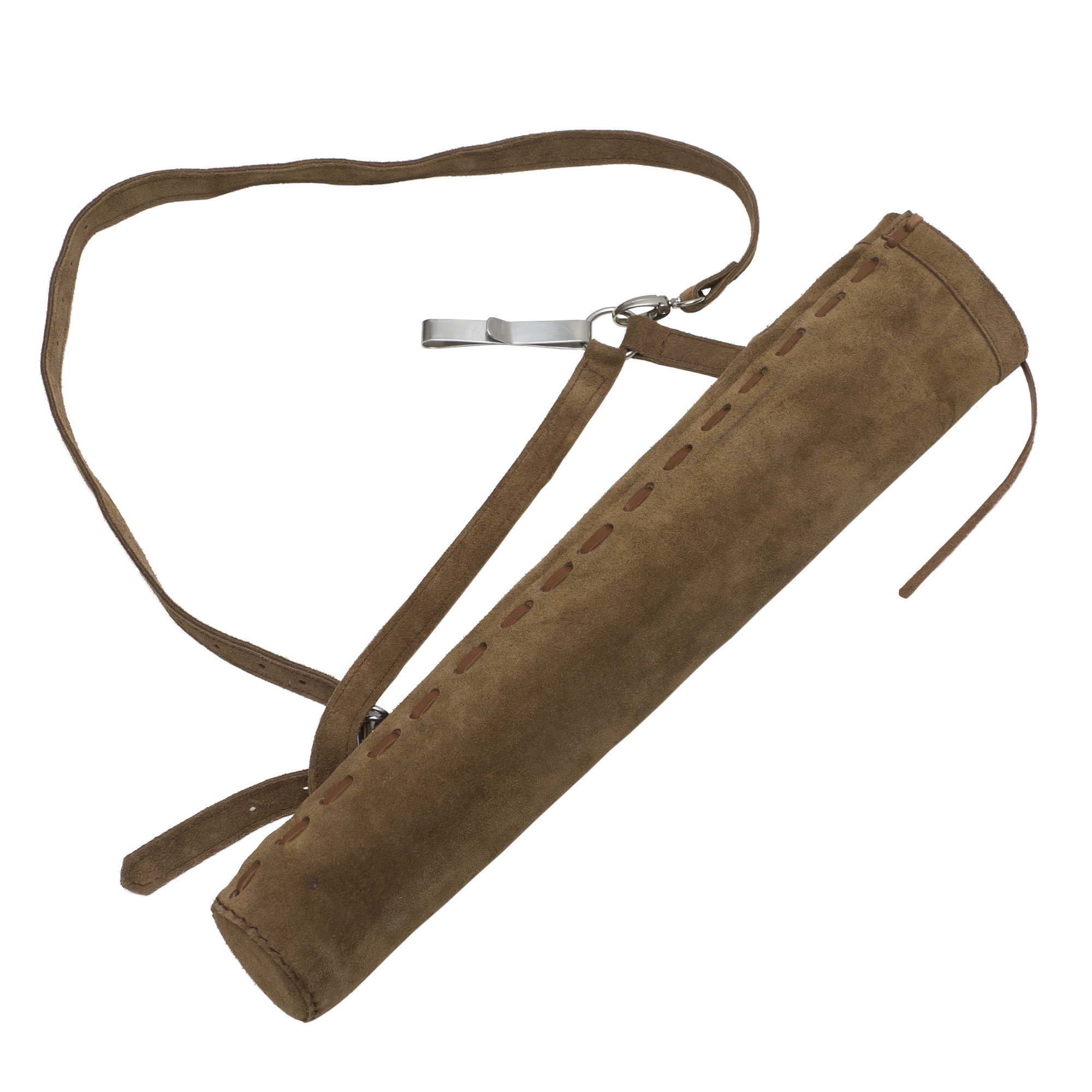 Arrows are the most important contributing factor to consistency and accuracy. The tighter the tolerances in regard to the physical weight of the arrow and the spine or stiffness the more consistent the arrows will be shot to shot and the greater the accuracy of the group overall. 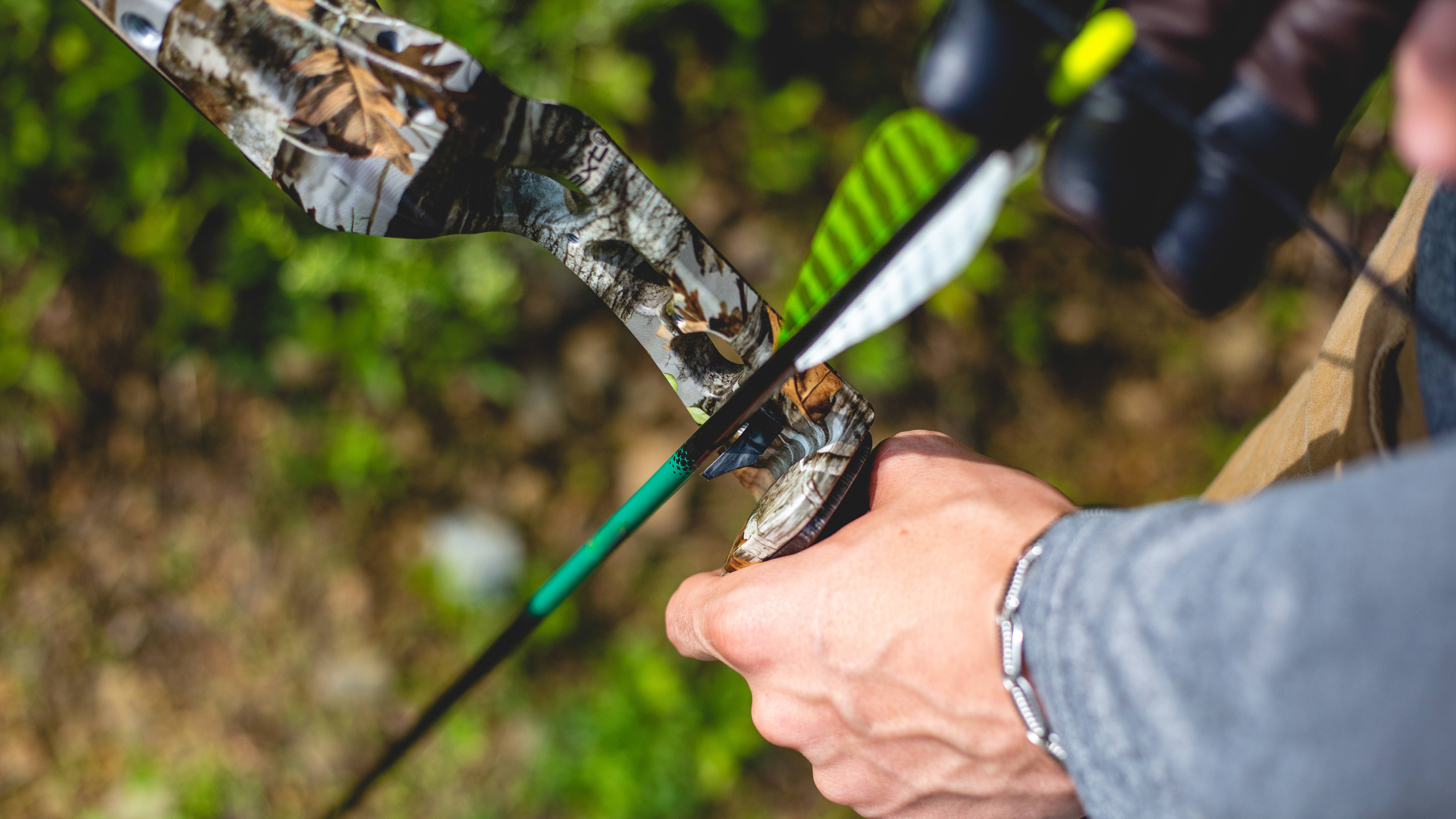 Arrows are available in three categories, wood, aluminum, and carbon.  Many traditional shooters like wood for the traditional connection. A wooden arrow can develop a crack is it strikes a hard object and if that crack goes unnoticed the arrow can break on a future shot. Aluminum and carbon arrows are much tougher and are more uniform is weight and spine. The choice is up to the individual but aluminum and carbon are safer and more accurate choices. Aluminum and carbon also offer threaded insert technology which allows for easy and quick changing of points as desired. Both are also available in “wood finishes” which keeps the traditional feel and look of a wood shaft.

Arrows for use in traditional bows should always be fletched with feathers which provide added forgiveness as the arrow passes the bow riser optimizing arrow flight.

For hunting small game a series of blunts, including rubber, plastic, and steel are available which do a nice job and are quite accurate. For larger game broadheads must be used.

Some traditional archers prefer glue-on style heads that can be re-sharpened with a file and stone. For those archers desiring to use a modern-day broadhead, there are some simple guidelines. Because a traditional bow does not provide the energy of a modern compound it is advisable to avoid using mechanical broadheads.

While light broadheads are popular among compound shooters for maximum speed heavy broadheads provide greater penetration and downrange accuracy out of any bow. Most dedicated traditional archers prefer a heavier broadhead. A 125-grain head should be the minimum considered with heavier heads available. Some personal experimentation in this area is suggested before making a final decision.

The above are some basic suggestions for traditional bowhunting accessories. The final decision is completely dependent upon the desires and taste of the user. There are no wrong choices. The right choice is the combination that provides you the best outfit in the style of your choice. The most important part is to be safe and enjoy!!